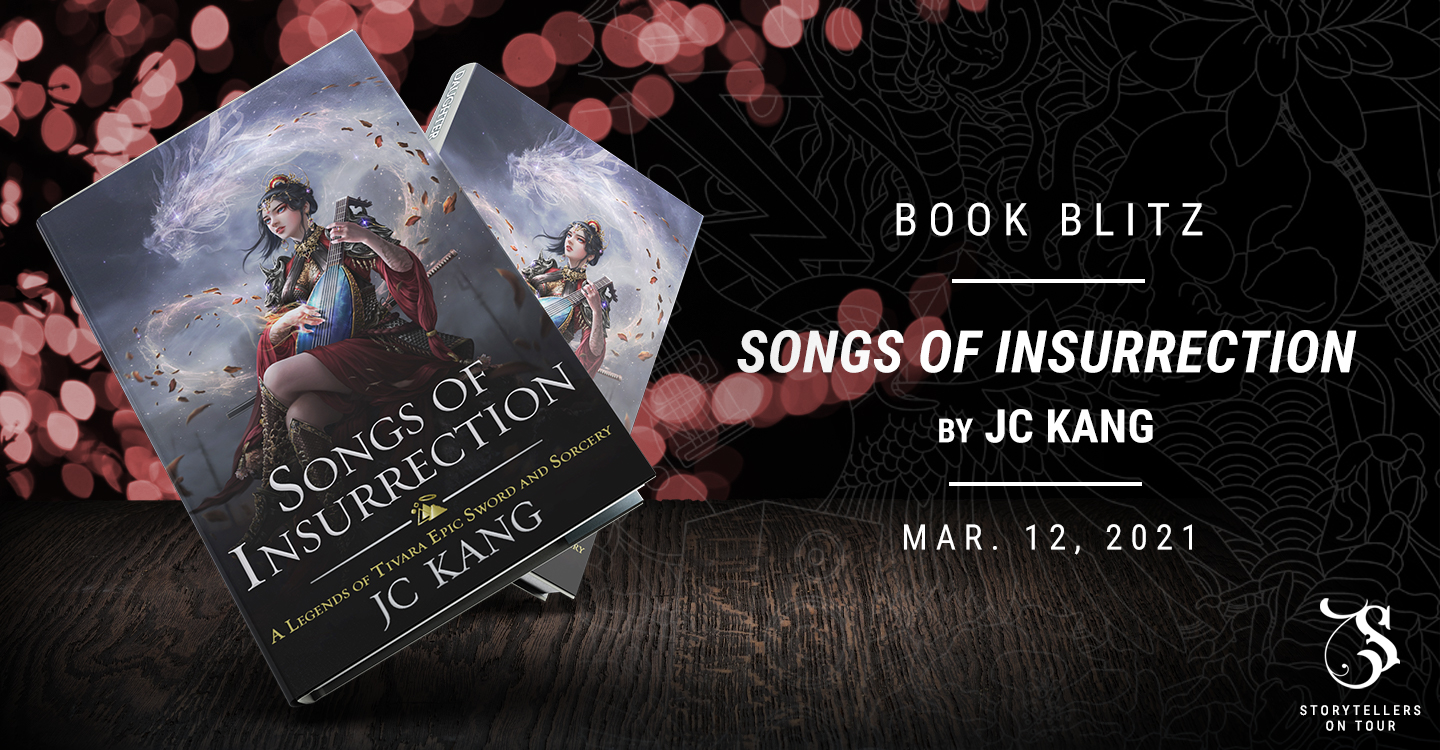 Welcome to the book blitz for Songs of Insurrection by J.C. Kang with Storytellers on Tour. Keep an eye out for others celebrating this book for spotlights, author interview/guest blog posts, and other reviews, and don’t forget to enter the giveaway! More on that at the end of this post.

Songs of Insurrection
The Dragon Songs Saga Book One
by J.C. Kang

Book Riot’s Top 8 Adult Dragon Fantasy Books
Lose yourself in this fusion of Asian and Western fantasy, which critics extol as “wonderfully opulent,” “Breathtaking,” and “Unique.”

Only the lost magic of Dragon Songs can save the world. Only an awkward girl with the perfect voice can rediscover it.

The Dragon Singers of old summoned typhoons and routed armies, liberating mankind from the orcs before fading into legend. Now, with the world again facing a new cataclysm, the power of music stirs in Kaiya, a naïve misfit with the perfect voice.

Without a master to guide her, she must rely on Hardeep, a disgraced foreign paladin, to help awaken her latent magic. His motives might not be entirely noble. When he leads her to the fabled Dragon Scale Lute, which only a Dragon Singer can wield, it is up to Black Lotus Clan to intervene.

Because the instrument’s fell power can save the world…

Anyone who orders Songs of Insurrection at the special launch price of $2.99 from March 12th through March 20th is eligible to receive a 6×9 double-sided cardstock print of the cover art of books one and two in The Dragon Songs Saga series!

My Rating: 3 Stars
Consider liking my review on Goodreads.

I was granted complimentary access to Songs of Insurrection as part of my participation in the March 2021 book blitz with Storytellers on Tour. My thoughts are my own and my review is honest.

Princess Kaiya lives in a world where magic through music is possible and she’s naturally quite skilled at it, but as a princess, it is not her place to influence the world so directly. In this, the first book in the series, we see Kaiya coming into her skill with this sort of magic, falling in love with a foreign prince, agreeing to a marriage of duty, and facing dragons. Dragons!

I love how much of this book and its world very clearly draw from Asian heritage and mythology that isn’t as well used and overly familiar in modern high fantasy. It’s fresh and intriguing! I also really felt like this book is a love story to Dungeons and Dragons type games with all of its little quests, big villains, and mission to improve vital skills. Having taken a peek at other reviews, I see I’m not alone on that. Fan of those sorts of games and/or LitRPG will probably find a lot to like in this book.

You might be wondering why it’s only a 3 for me and that’s the lasting impact this book leaves, which is sadly underwhelming. I started this book as soon as my review copy came in, put it down to get a few sooner tour reads finished, and then forgot I had started it. When I returned to the book I thought I was going to start the book only to find I was halfway through. It did all come back to me as soon as I jumped back in, but when I put it down the first time at 54% it didn’t call me back. I think the problem for me was the sheer volume of characters and cultures and settings and myths and politics and this and that and everything that was introduced, there was so much information that the plot kept getting lost. From the first half of the book I remember some music lessons, I remember Kaiya being charmed by the foreign prince, and I remember a plot to sneak her out of her own palace so they can go on a quest to steal an instrument from some other palace that didn’t work out, but I’m not completely clear on how that fits into the politics that lead her to agree to a marriage in the second half, etc.

The world in this book is interesting, and music magic & dragons are awesome, so I do hope that this series is just getting its feet under itself in this book and that it’ll get better as it goes on. If you love epic fantasy series and you’re okay with a first book that hits hard with EVERYTHING you need to know about everything, this may be the start of a great series for you.

JC Kang’s unhealthy obsession with Fantasy and Sci-Fi began at an early age when his brother introduced him to The Chronicles of Narnia, Star Trek, and Star Wars. As an adult, he combines his geek roots with his professional experiences as a Chinese Medicine doctor, martial arts instructor, and technical writer to pen epic fantasy stories.

Enter to win a paperback copy of Thorn of the Night Blossoms by JC Kang (international.)