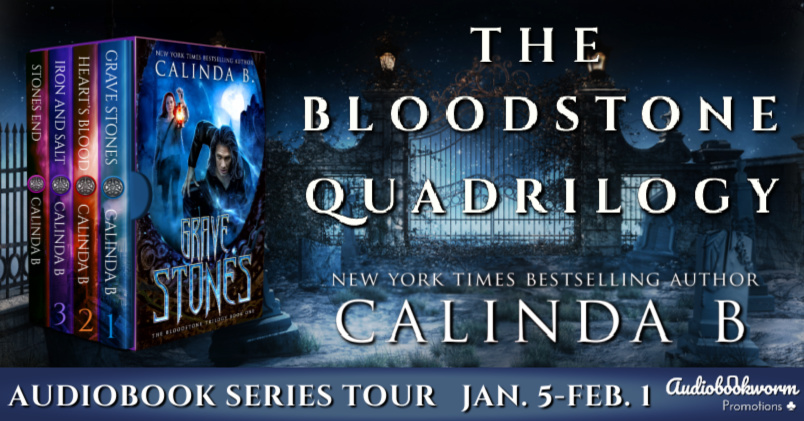 Welcome to one of the January 11th stops on the blog tour for The Bloodstone Quadrilogy by Calinda B., specifically part one of the tour for book one, GraveStones. This tour was organized by Audiobookworm Promotions. Be sure to follow the rest of the tour for spotlights, audio excerpts, character interviews, guest posts, author and narrator interviews, and reviews! And come back here on January 17th for my review of the second book! (Book Two, Book Three, Book Four)

Grave Stones
The Bloodstone Quadrilogy Book One
by Calinda B.

Genre: Dark Fantasy Romance
Add it to your Goodreads TBR!

From New York Times and USA Today bestselling author Calinda B comes a modern day tale of an ancient Irish myth. Revenge is a bloody business…
Lassi Finn is a thoroughly modern Dublin girl, and the last thing she wants is to spend any time cleaning out her recently deceased Great-Aunt Roberta’s cottage in the obscure village of Ballynagaul—or ‘Ballynanowhere,’ as Lassi calls it. Her goal is to throw everything away, get some poor local sod to paint and fix the wiring (because the power is temperamental and the wall phone won’t work), and then hire the local real estate agent to flip the cottage and add the proceeds to her cottage-in-Barbados fund.

The only flaw in her plan is the wee little inconvenience of three mutilated bodies turning up on three consecutive days, all before her first cup of tea. The motives for the killings are a mystery, but their ferocity leaves no doubt as to the rage in the heart of the killer. Without even trying, and certainly unwillingly, Lassi finds herself not only in the middle of the investigation, but also with a big, blood-red target on her back.

Somewhere between trying to fend off the advances of a pub keeper who has hit his sell-by date, dodging a creepy detective who seems to know far too much about her, and avoiding an annoyingly helpful neighbor, Lassi must catch a cold-hearted, cold-blooded killer and resist the growing attraction between herself and a handsome young priest with a secret that could destroy them all.

Interview with Lassi Finn from the Bloodstone Quadrilogy

Q: What is your occupation?
A: Labor and Delivery Nurse in Dublin. I love to deliver babies.

Q: What does your voice sound like?
A: a. Oh, when I’m in a twist my friends might say I sound like a banshee. But my lover will testify how sweet and dulcet I can sound when I want something.

Q: On what occasions do you lie?
A: a. When the situation warrants it, I’ve been known to fudge the truth. Especially when it comes to hiding supernatural secrets. You have to protect the innocent from things they don’t understand as well as the people you love from hysterical overreactions by those who don’t understand.

Q: Which words or phrases do you most overuse?
A: a. Probably feck. Fecking. Feckity feck. Fina-fuckingly. All good words in my book.

Q: What did you want to be when you grew up?
A: a. A Labor and Delivery Nurse. I used to pretend to deliver babies with my dollies when I was a child. I was a bit precocious, I guess and knew which place the babies emerged from.

Q: When did you have your first kiss, and who with?
A: a. Let’s see…that would probably be Dylan O’Malley, out behind his Da’s sheep barn. I was ten and he was twelve. I let him kiss me and then, when he tried to grope my chest, I kneed him in the nuts. After that, he got caught in a sheep stampede. He had it coming. I was so mad when I ran across the field to get away from him, I might have frightened the sheep. Poor guy is frightened of sheep to this day.

Q: What are your views on sex?
A: a. That you should do it as much as possible if it’s consensual and fun for all. Why not? It feels good.

Q: How honest are you about your thoughts and feelings in the company of others?
A: a. (laughs) Ask anyone. I’ll tell you the truth, I will, and I won’t spare your feelings if its something that needs to be said. I’m not cruel. Simply practical.

Q: Do you tend to argue with people, or avoid conflict?
A: a. If a conflict needs to be had, I won’t back away. It’s not like I go sporting for a fight, though. I just won’t back away from one if it’s inevitable.

Q: What shocks or offends you?
A: a. There’s not much on this planet that can shock or offend me. I can’t think of anything. Except maybe the prejudice and racism that some people carry around, like they’re so perfect they can afford to judge another by skin tone or income or some such. I find that offensive. We’re all little snowflakes, after all.

My Rating: 3.5 Stars
Consider “liking” my review on Goodreads

I was granted complimentary access to the audiobook Bloodstone Quadrilogy box set on Audible by the author, Calinda B, and Audiobookworm Promotions in exchange for an honest review. Thank you for the opportunity! This has not swayed my opinion. My thoughts are my own and my review is honest.

Grave Stones is the beginning of the Bloodstone Quadrilogy, and the story of how Lassi Finn ends up staying in Ballynagaul. It’s part romance, part dark urban fantasy, and part mystery; something for everyone! When Lassi comes to the small town to handle the affairs of her late great aunt, other people start dying and an inspector seems to think she’s to blame.

Have you heard of the YouTube channel Honest Trailers? They guys who re-cut movie trailers to give accurate expectations for the film? Well if they did the same for books, the tagline would be “OB nurse finds herself in the middle of Smalltown Ireland and refuses to realize that the man she’s sleeping with isn’t what he appears to be.” I ALMOST had it figured out. I wasn’t correct about what the priest is, but I was correct that he’s not the mortal young human he appears to be (come on Lassi, that much is so obvious!) and somebody else actually is what I thought he was.

The setting and everything about how the characters speak and act is so over the top Irish that sometimes it felt odd to come across technology that reminded me this is taking place in the 21st century. It feels like historical fiction most of the time, and then surprise, someone has a cell phone or someone looks something up online. It’s quite charming in that way, so hopefully that means lovers of Irish culture, Irish stories, and historical fiction will feel right at home in these books. (At the time I’m writing this review I’ve already listened to the second book as well, and this feeling continues.)

While the dedication to making sure everyone feels and sounds Irish, I must question the fact that absolutely everybody in this town prefers the slang term “cuppa” over the phrase “cup of tea.” Not one of them uses a different word or phrase? It was charming at first, but by the end I really wanted someone to say the word tea! I also found the frequent use of the word “tummy” quite grating. Perhaps it’s different over in Ireland, but here in North America that tends to be a childish word to use, and our licensed nurse is using it for both stomach (upper abdomen) AND uterus region (lower abdomen.) Given that this is meant to be a present-day setting and she’s a licensed nurse from Dublin, she’s the last character I expected to abuse a colloquial anatomy term. Then again, she speaks in abbreviations (temp instead of temperature) so perhaps it’s a character trait. Either way, her manner of speaking was annoying.

I think Calinda B handled the large cast (a whole town of people!) very well, and I was never once confused which character’s head we were in, who was speaking, or how the different characters were tied together. My favourite character is Cillian, who is absolutely shaping up to be the misunderstood bad boy side of this romantic pairing.

Speaking of romantic pairing… holy sex. The synopsis on this book needs to make it more clear that there’s going to be frequent, graphically described sex. I agree to reviewing this quadrilogy because it sounded like an interesting fantasy mystery with some romance and I’m absolutely in love with the narrator’s voice. I was not expecting multiple sex scenes worthy of an erotica novel! That is not at all my thing and I started skipping through them. I know some readers really like steamy love scenes, but these felt unnecessarily detailed to me. The budding relationship itself also felt very rushed. This isn’t a YA title and these aren’t teen characters, so I’m not going to be lenient on “insta-love” showing up here.

As for the audiobook performance, Alex Black’s narration was perfect! I want him to read me bedtime stories because his voice is so calming. When I was presented with the opportunity to review these books I was hesitant about the packed schedule squeezing four books into one blog tour, so I listened to the preview clip for Grave Stones first, and I just had to say yes so I could listen to more!

Overall, as an audiobook with Alex Black’s wonderful voice and the option to fast forward through the sex scenes, this is a strong 4 if not a 4.5. Keep your eyes open for reviews coming for books 2-4!

A New York Times, USA Today and #1 Amazon bestselling, award-winning author, Calinda B writes kick-ass heroines who don’t know their own strength. When she’s not writing, she’s been known to fall off ice cliffs; fire walk with Eastern Europe fire officials; or wake up from a six weeks coma, wondering how she got there in the first place. She’s been stuck in currents at Deception Pass in her kayak, and loves to swim with sharks. She greets every day with gratitude and an openness to what might be around the next corner.

She’s also an EMT serving her local community as a volunteer. Her tagline is, “Let’s go save some lives!”

Alex Black is an articulate, engaging, and versatile narrator based in Cambridge, Vermont. He’s worked in theatre, film, audio production, and appeared on radio. As an accomplished audiobook producer with over 90 titles, he’s worked closely with independent authors and publishers.

Follow the rest of the tour for more great features!

The Odd and the Strange [Book Tour with

The Foes Between Us – 4 Star Book